TLDR: Honor delivers well-deserved smackdown left and right. Another free book link at the bottom of this post! 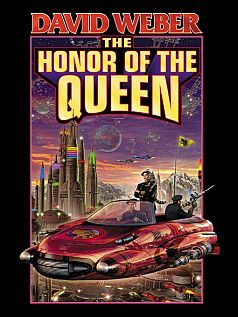 The Honor of the Queen cover by David Mattingly

The Honor of the Queen is the second book in David Weber’s Honor Harrington series and was originally published June 01, 1993. It takes place three years after the events that took place in On Basilisk Station which I reviewed last week on the blog.

The reason I usually recommend new readers start their Honorverse experience with this one, rather than On Basilisk Station, is that it’s got better action and better hooks. This is a long series of books written by several different authors (primarily by David Weber of course but more on that when I get that far in the review series). Its strength lies in the wealth of build-up in each book and over the course of the series. But that’s also a hurdle for a lot of readers who like their action up front and center. The payoff, however, is real, ladies and gents. Put this series on your reading list especially if the news is making you want to punch bad guys.

On that note, an interesting side topic for this Honor book are the examples of her coping with her inner bully, let’s call it for now. Honor has a temper. A real one with steel and murder behind it. She is capable of the kind of shocking violence that movies like to glamorize but in real life makes most people want to puke. She could, if she didn’t keep herself reigned in so tightly, be one very scary lady. And we get to see some hints of that in this book.

The Honor of the Queen cover by Larry Schwinger

The synopsis – more or less.

Manticore and Haven are still maneuvering in a cold war build-up but everyone knows the big one is coming. Seeking a strategic location for a forward base, Manticore sends Honor and her long time mentor Admiral Courvosier to the Yeltsin system to negotiate with a backward planet of religious neobarbs on planet Grayson. The Graysons have lived for over a thousand years with little to no contact with the rest of the galaxy and have very strong patriarchal beliefs where women’s rights are concerned. They can’t vote, they can’t serve in the military and a household generally consists of one guy with three or more wives. 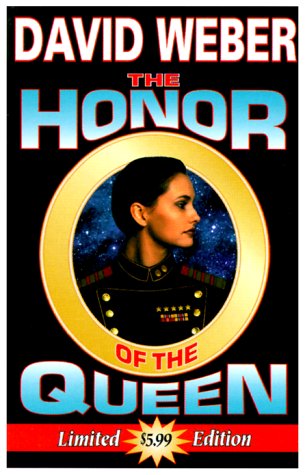 The Honor of the Queen cover by David Mattingly. Hardback, special edition

In return for allowing Manticore a place to head off an impending Havenite invasion, Graysons are hoping to get a significant tech boost into the current age of technology as well as military aid with their displaced homegrown religious zealot group. Yes, there is yet another group of religious fanatics that are even more fanatical. It can get a bit muddied for your average cynical atheist to read.

Weber makes no bones about his portrayal of religious isolationism and the Graysons and Masadans are I think, generically Abrahamic to lend the implicit criticism to several current religious groups. He’s set up a societal clash here between one society which no longer has a societal memory for things like institutionalized misogyny, and another society which likewise has forgotten that human beings can, in fact, live without a gender divide.

…sweeping, simplistic solutions to complicated problems are much more appealing than tackling the real thought that might actually solve them.

The Honor of the Queen, David Weber

The enormous distances of space travel allow for human societies in Weber’s universe to devolve in different ways and it’s an interesting (and horrifying) problem he revisits often in his books. In this case, it’s a planet populated by an American Christian sect with a strong anti-tech/anti-science flavor. Basically, they outfitted a colony ship and left Earth to go somewhere where they could live without technology interfering with their communing with god. Unfortunately, upon arrival, they discover their planet is too poisonous with heavy metals to live on for humans. Unless you utilize a lot of science and technology.

This is the book where I find that the Honor stories crystallize in terms of feel and formula. Yes, there is some formula to the Honor books. She goes up against impossible odds with inadequate ship/crew/information/celery and takes her ship into what appears to be a certain death ride against a vile and powerful enemy to save the innocents. Yes, this is a lot of what happens in the first handful of books. That doesn’t make it a bad formula and it doesn’t stay that way either as the main plot progresses over some 18 books or so.

More importantly in The Honor of the Queen, we see the first real example of a sympathetic point of view from the adversary’s side. In this case, we follow Havenites Alfredo Yu and Thomas Theismann. And root for them! Even though they are the enemy and their actions do cause Honor wrenching pain. 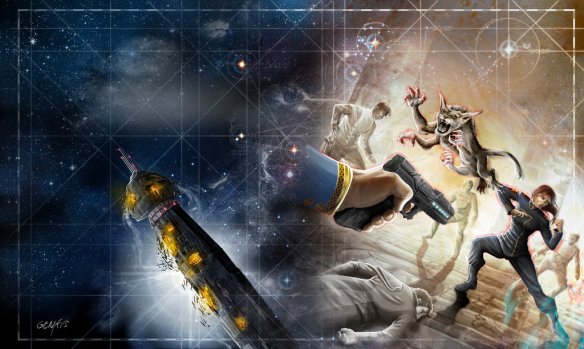 The Honor of the Queen cover by Genkkis

Remember those two names though! Without blowing their significance it’s safe to say that both will play important roles in the conflict between Manticore and Haven.

Without giving us too graphic a look, Weber shows us just how messed up the Masadans are through their views of outsiders, through their treatment of prisoners of war, especially their female prisoners and through their willingness to risk a conflict with Haven by pirating one of their ships. Suffice to say David lays in a lot of wood on the Masadan bonfire and having Honor finally light it is very satisfying.

And that too is a part of the formula for Honor books: Once we get to the ass-kicking scenes you are really hungry for them. The ass kicking is well and truly earned and relishing some righteous payback is the high that you finish these books on.
And finally, another big point for me that I brought up last week: Still no gratuitous romance plot.

If you want to read this book for free you can from the Baen Book Library:

The Honor of the Queen free legitimate download from Baen Books.

2 thoughts on “HONORVERSE – The Honor Of The Queen, David Weber Book 2”

Talk to me! Cancel reply