Hey guys!
I’ve moved the blog over to Walk Off The Path – Now a shiny new location with an easy to remember url!

It’s also prettier and has cake! Well no, there’s no cake but it is quite pretty and would love to have you drop by and shoot the breeze on your favorite books and things.

So, come on over!

Here’s a quick fly-by of some amazing fan art talent on Tumblr who share my anticipation for what hands down will be the most important game release of 2017. Please visit, drop likes and follows. We’re all a big community who share a love for a massive and ever-growing fictional universe.

First, we have a wickedly sultry Peebee by Italian artist Ellieraptor. There’s a Tshirt design if ever I saw one. 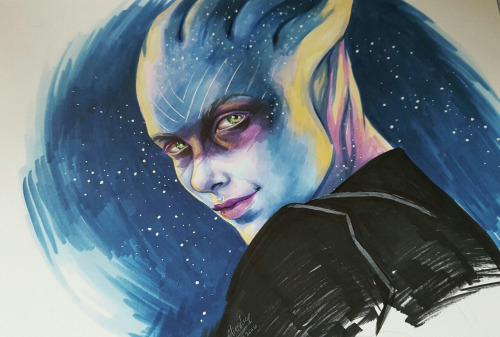 As if I wasn’t already head over heels for PeeBee! Ukranian artist Kapuzin has drawn her END_OF_DOCUMENT_TOKEN_TO_BE_REPLACED

I promise I won’t flood these posts with pretty pictures of my own Shepard but you have to accept one every now and then. Or you know, not. Whatever works for you.

Agnes Shepard, ME2, Getting ready to kick ass

In this case, it’s a shot of my Shepard getting ready to beat up on some mercs on Omega. She just found out that her old friend Garrus is back in town and there’s nothing she can’t do and nobody that’ll get in the way of her taking him back to the Normandy where he belongs!

Normally I’m not a big fan of mechs. Not in the way that I see some people lose their minds over any game or movie that even hints of mechs (Pacific Rim anyone?).

But the Atlas mech is just darned cool. Intimidating when you go up against it the first time, sure but cool all the same and then they let you drive one later! 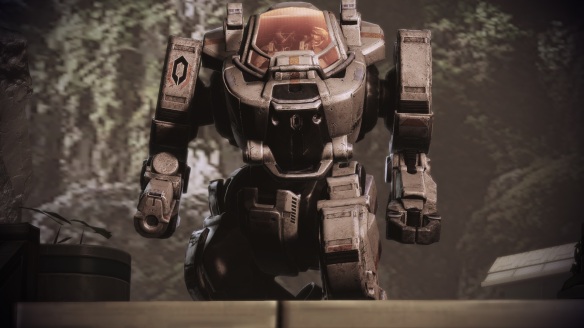 Also, of note, the first or one of the first time you encounter one of these babies in Mass Effect 3, the game slow motions to really let it sink in how screwed you are.

Protip: There’s an exhaust port located at the rear of the mech which purportedly gives you a 40% damage boost. So in the immortal words of Deadpool: Put one up Main street!

Interesting tidbit: This mech was supposedly developed based off the YMIR mechs of Mass Effect 2.

This is a glimpse of the Normandy shooting across a Star Wars-esque upper fraction of a planet at the end of Mass Effect 1. 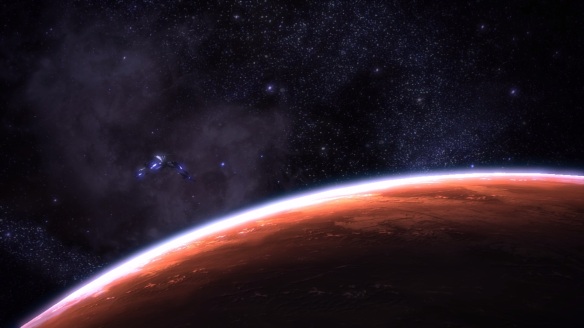 Honestly, I think I can do better with this shot but that’s as good as I’ve gotten it so far. If you have been able to time it better do share! Let’s see a better version. Looks so pretty as a Twitter background!

Flight Lieutenant Jeff Moreau aka Joker and the one screenshot I bet everyone has of him who has played the game. Well a lot of you anyway! 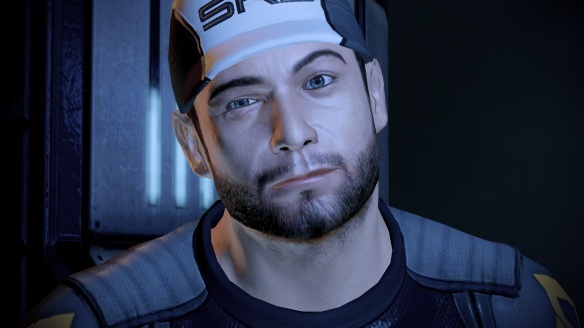 “I enjoy watching humans on their knees…”

Joker is voiced by and to some degree modeled after Seth Green, the cutest Buffy werewolf in the history of the furry critters and the character is by far one of the biggest stars of the ensemble as well as the behind the scenes glue that holds the Normandy and its disparate crew(s) together with his quips and off-color remarks.

Seth has done a huge amount of voice work including but not limited to Robot Chicken, Avengers Assemble, Family Guy, Aqua Teen Hunger Force and Star Wars: The Clone Wars.

And I bet you didn’t know he voiced Howard the Duck in the after credits scene of Guardians of the Galaxy.
He’s also starred in several movies and appeared in several TV shows. You might be able to spot him as an expo fan in Ironman 2. 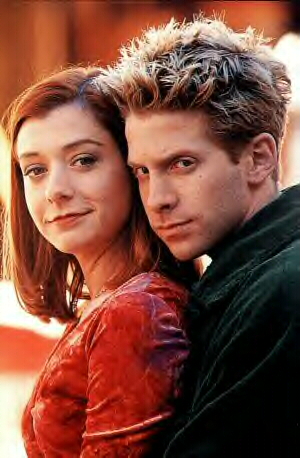 This may not be the girliest thing I ever screenshot in a game but I happen to have a bit of a weak spot for the Krogan Tomkah. I bet it doesn’t just roll over at the slightest bump in the road! 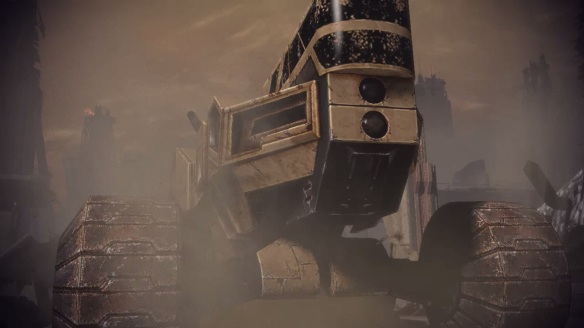 Also they remind me that Krogans still have mechanics. They may have been uplifted by the Salarians to fight the Rachni back in the day, but despite what our amphibious Council friends would like to have us believe, Krogan had a lot more going for them than flint spears and fire when the Salarians came along. As a matter of fact, they were probably at least as technologically capable in a lot of ways as we are now. After all their nuclear holocaust happened before the Salarians came along.

Makes you wonder what monsters we humans might become if an alien race swooped down and bestowed all manner of overnight tech upgrades in return for saving them from a galactic threat.

Also, Picard would not be pleased with the Salarians. Not one bit. Which means Wrex would have something in common with Jean-Luc! Too dorky?

The very gloom of the Normandy drawing close to the disabled Collector ship in Mass Effect 2 also makes it a tricky prospect to screenshot. A lot of play-throughs the shots from this scene have gone straight into the bin. 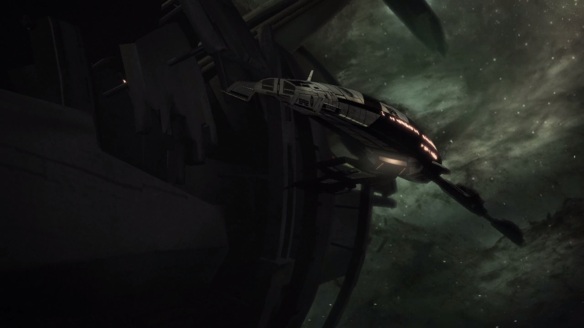 In a lot of ways the collector ships annoy me with their rocky outer hulls. What possible purpose does that serve? Unless you look at it as a cancerous growth manifesting on the ship itself. A warning of the altered state of the beings that crew it maybe.

You encounter this scene on the mission to acquire an IFF that will allow a ship passage through the Omega IV Relay.

Today we have a look at a young Garrus Vakarian, the Turian CSec officer who joins your crew in BioWare’s Mass Effect. Aka spacehubby! 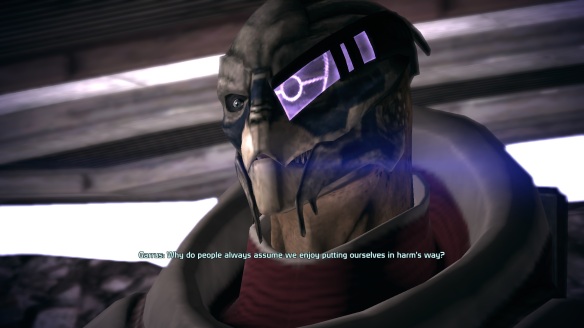 Just look at those chiseled mandibles! Not a scratch on them. It’s like looking at old Lance Henriksen pictures from before he grew into his craggy face. Spoiler alert, it doesn’t last. Treasure the beauty of young Garrus for as long as you can.

Did you know that Brandon Keener, who voices Garrus Vakarian in all three Mass Effect games was on Marvel’s Agents of S.H.I.E.L.D.?

Guess who has two thumbs and started squeeing when they spotted him there?

The Destiny Ascension, the flagship of the Citadel Fleet in BioWare’s Mass Effect, is what I think of when Rear Admiral Mikhailovich confronts Shepard with the viability of building a Stealth Recon vessel like the Normandy.

If ever there was a wasteful, useless boondoggle it has to be this gigantic thing. It is so big that one Volus, you can overhear in the Wards while talking about touring the ship said they’d barely managed to see ten percent of the vessel and it sports a crew of 10.000. Worth bearing in mind when you have to decide its fate from the perspective of what Shepard knows at that point in time. You aren’t just killing the Council!

If you’re min/maxing however, the choice is simple: Save the Council. The Destiny Ascension becomes a formidable dreadnaught in the fight to retake Earth in Mass Effect 3.

In any case, it sure is pretty!