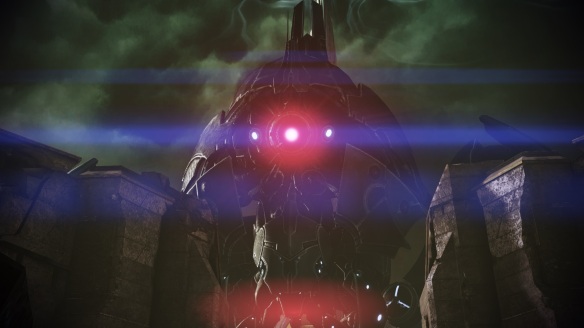 In a war that has thrown the entire galaxy into violent upheaval, they meet across opposite sides of a battle that only one of them will survive.

They were from different worlds. His destiny was writ large across the stars of the galaxy and the eons of time. Hers was forgotten, doomed to wither away with the dust of ancient history. In the middle of the greatest war ever experienced by the sentient species of the Milky Way, they find each other.

She as the last defender of a broken and war torn planet, the last mother of her people. Firey and tempestuous!

He is the stoic conqueror tasked with subjugating and civilizing her barbaric lands.

The clash of their wills will spell the greatest romance time has ever seen.

Their passion will scorch the skin of Tuchanka with the fire of a hundred suns. 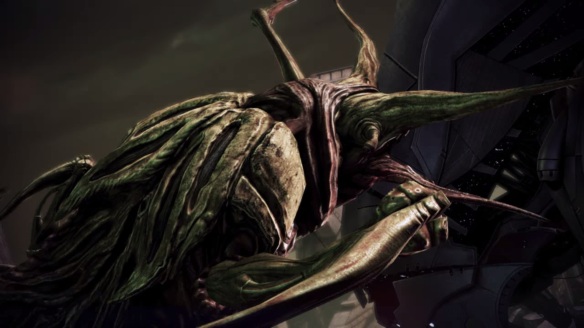 The Krogan will sing of their embrace for a thousand years.

But only one of them will survive the battle that fate has forced upon them!

Today, to much fan fanfare, BioWare released the first in a series of videos that gives us a look at the combat through gameplay videos. It’s linked below so you can scroll right down to it, but here is the run-down of what it has to say about Weapons, Tech and Biotic skills in Mass Effect Andromeda and my thoughts on the matter.

First of all the new dynamic cover system in ME:A will allow you to use anything for cover. Simply press against it and you’re in cover. We’ve heard last year that the cover system wouldn’t be END_OF_DOCUMENT_TOKEN_TO_BE_REPLACED

You can’t romance him in game but what happens in your head stays between you and Urdnot Wrex. After all some women, and some men, find facial scars attractive. The gratitude we owe BioWare for lovingly rendering Wrex in all his glory in the high definition scenes of Mass Effect 3 knows no bounds.

Hey even if you don’t want his babies, his many, many babies, you have to admit that Wrex has a damn quad and a damn fine profile. I mean look at that smile. Look at it!

…Excerpt from “Urd.Wrex a History” a compilation of photos and anecdotes on the new Krogan version of Tumblr curated by one UncleUrdnot.

A view from on Aria T’Loak’s station, Omega during the Omega DLC. It’s tricky getting a good screenshot outside of cut-scenes in Mass Effect, viewing angles and GUI messes with that a lot. But with a bit of cropping this piece actually came out pretty good and it fits a Facebook background perfectly.

Omega is definitely on the must get list for DLC. Or at least it is if you have a liking for its badass queen. The shot above is just one of a hundred different fantastic new views of the station. It’s a whole new level real. It’s Knowhere. It’s Nar Shaddaa only with a lot bigger dash of realism.

The Destiny Ascension, the flagship of the Citadel Fleet in BioWare’s Mass Effect, is what I think of when Rear Admiral Mikhailovich confronts Shepard with the viability of building a Stealth Recon vessel like the Normandy.

If ever there was a wasteful, useless boondoggle it has to be this gigantic thing. It is so big that one Volus, you can overhear in the Wards while talking about touring the ship said they’d barely managed to see ten percent of the vessel and it sports a crew of 10.000. Worth bearing in mind when you have to decide its fate from the perspective of what Shepard knows at that point in time. You aren’t just killing the Council!

If you’re min/maxing however, the choice is simple: Save the Council. The Destiny Ascension becomes a formidable dreadnaught in the fight to retake Earth in Mass Effect 3.

In any case, it sure is pretty!

Taking illustration to the outer limits of what is epic and grandiose – meet Evolvana, a gamer and visual artist from France who will woo you with grandiose views of Middle Earth or behind the Wall. Vana  has spent a lot of time in New Zealand and Japan before returning to France during which time she also journeyed in games and books from the Thrawn trilogy and Final Fantasy to Game of Thrones and Star Wars: The Old Republic. Join us after the break as we talk about her travels, her own dark fantasy project and the do’s and don’ts of in game romance.